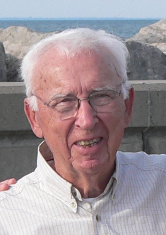 John C. Cetin, 93, a family physician/surgeon who cared for patients from his office in Erie County for nearly a half-century, passed Wednesday March 20, 2019, of heart failure at Hospice Buffalo, with his family, by his side.

Dr. Cetin was an old-fashioned family physician. If a patient had an emergency in the night, he would meet the patient at Lake Shore intercommunity Hospital or go on a house call. He was known to use the barter system when patients could not afford medical care.

He would deliver the baby [or whatever case presented itself] and then come out. He had a heart of gold and could never turn down anyone in need. "Until several months before his death, he kept his doctor's bag nearby.  "I think it was from the 1950s," his son said. "It looked like it had been through a war." Dr. Cetin delivered his 2 eldest children.

Dr. Cetin was born in March 1926, as the influenza epidemic was beginning to sweep the nation. When he was 3, the stock market crashed in 1929. He experienced the Great Depression as a teenager. Life wasn't easy.

"His younger sister, Paulina died of rheumatic fever as a 13year old child, and they didn't know how to treat it," his daughter said. "He said this was the reason he wanted to be a doctor. He was a survivor." His older sister Jenny died in 2015 at the age of 94.

Originally from Slovenia, his parents, John and Paulina C. Cetin, settled in Sharon, Pennsylvania. Dr. Cetin graduated from Hermitage High School in 1943, served in the U.S. Army in 1944-1945 and completed the premedical program at Westminster College, New Wilmington, Pa in 1947.  He was active in the Slovenia heritage.

In 1952, he graduated from Philadelphia College of Osteopathic Medicine and served an internship at Grandview Hospital the following year. Later, he was board certified in family medicine.

Dr. Cetin opened a private practice in 1953. He maintained an office in Angola, New York. His Angola house had outside steps leading into the lower level of his home, which contained waiting and treatment rooms, a laboratory, and an X-ray machine. The family lived upstairs.

Resident nearby say that he was "My childhood doctor from Angola, New York. I have often thought of you as I pass your former home and office. A very nice man and doctor”.

Dr. Cetin was active in obstetrics and general surgery. He was one of five founders of Lake Shore Hospital and served on the staff until 2001. He served as the president of the medical and dental Staff at Lakeshore Hospital Inter-Community Hospital in 1966. He served as physician from 1989 to 2005 at the Gowanda Correctional facility.

Over the years, he expanded his expertise to encompass, cardiology and gastroenterology. He never stopped learning.

"He practiced medicine until the age of 76, never had a partner, and loved every minute of it," his family said. He retired in 2005, albeit reluctantly.

Dr. Cetin married Suzanne K. Erick in 1973. He had 5 children, 6 grandchildren, and 2 great grandchildren. When not working, he enjoyed his family, home and nature, reading, skiing and studied Ornithology.

A memorial service will be held this summer with interment in Oakwood Cemetery, Sharon Pennsylvania.

Share Your Memory of
Dr. John
Upload Your Memory View All Memories
Be the first to upload a memory!
Share A Memory
Plant a Tree